My wedding dress was mauve in color. Reaching to my ankles, it had long sleeves and a low neckline. My sister-in-law Kathleen bought it for me for my birthday.

In June of 2005, after my late husband Bill proposed to me, he was living in Fowler, Colorado, and I in Sheridan, Wyoming. Bill planned to move to Sheridan and marry me.

Meanwhile, I was visiting him in Fowler, where he’d planned a barbecue. Many of our family members and friends were invited, including my brother Andy and his family, who lived in New Mexico at the time.

Since hotel accommodations in Fowler were limited, Andy and his family stayed in Pueblo, about twenty-five miles west of Fowler. Kathleen and I went to a mall, where she helped me pick out the dress, a slip, bra, and shoes to match. 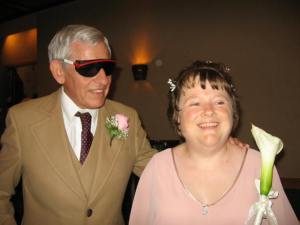 On the day of the wedding, September 10th, 2005, which was held in my grandmother’s back yard here in Sheridan, I paced the upstairs hall between the bathroom and my aunt’s old bedroom, thinking Kathleen had the dress with her at the motel where they were staying. Through the open bathroom window, I could hear guests arriving and music from the string duo my father hired for the occasion. As the time grew closer, I wondered if I’d be parading down the aisle in my underwear.

At almost the last minute, Andy and Kathleen arrived with the children. It was then that I discovered that the dress had been lying on my aunt’s bed all that time. Because of my limited vision, I hadn’t spotted it.

Later, as Dad escorted me down the aisle to the strains of Pachelbel’s Canon, I didn’t see Bill, either. Earlier, he’d planned to go with friends to The Mint Bar. Was he still there, or had he developed cold feet after having too many drinks? Of course he was totally blind, so he couldn’t have jumped in his car and hit the interstate in the direction of Colorado, but still… Then, there he was, in his green suit and the sunglasses he always wore, and I had no more worries.

My wedding dress still hangs in my closet. In January of 2006, three months after Bill and I were married, he suffered the first of two strokes that paralyzed his left side.  I cared for him at home until he passed in October of 2012. You can read our story in My Ideal Partner.

If you have a blog, you can tell your story there and link to it here. If not, please share your story in the comment field. I look forward to hearing from you.

I'm the author of two novels,, two poetry collections, and a memoir with another novel on the way. My work has appeared in various journals and anthologies. I'm visually impaired and live in Sheridan, Wyoming, where for six years, I cared for my totally blind late husband who was paralyzed by two strokes. Please visit my website at http://www.abbiejohnsontaylor.com. View all posts by abbiejohnsontaylor

Showcasing My Writing and Me

The Only Tech You Will Ever Need

spiritual enlightenment and self improvement

Consider it all fiction ;)

Words of a clarklike female

Walking you through it or taking you to it

Blind on the Lite Side

Up and Down the Blind Highway of Life