In 1985 when I discovered public radio, I quit paying attention to the popular music scene, so I never heard this song until now. I like the idea it expresses that you should capture a dream, no matter what. I hope you young people out there who aren’t sure what to do with your lives will take this song to heart. 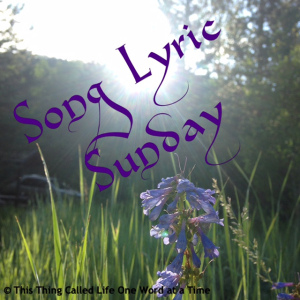 Song Lyric Sunday was created by Helen Vahdati from This Thing Called Life One Word at a Time. For complete rules or to join in the fun, click here.

The theme for Song Lyric Sunday this week is “dream.”

Yes, when I found out this week’s theme, the first song in my head was the massive hit by the Eurythmics. However, it was quickly pushed aside by a lesser known song which has been a favorite of mine for a quarter of a century. (Think I just dated myself there! 😀 )

Regina Belle is best known for A Whole New World (Alladin’s Theme), her 1993 Grammy-winning duet with Peabo Bryson. Released in late 1992, the song reached number one in March of 1993, knocking Whitney Houston and the colossal I Will Always Love You from is 14-week reign.

I'm the author of two novels,, two poetry collections, and a memoir. My work has appeared in various journals and anthologies. I'm visually impaired and live in Sheridan, Wyoming, where for six years, I cared for my totally blind late husband who was paralyzed by two strokes. Please visit my website at http://www.abbiejohnsontaylor.com. View all posts by abbiejohnsontaylor

I am a writer, genealogist, a Humanist Pagan, life long autodidactic student of world religions, history, anthropology, sexuality, body acceptance, trauma, and healing. This blog is about my life, studies, beliefs, and interests including art, culture, fashion, cuisine, health, challenges, sexuality and more.

Myths of the Mirror

Ideas on writing and baking

A confessional where people come to reveal too much information--sexy secrets, dirty deeds, and more.

a collection of trivia, fun facts, humor, and interesting notions.

The Heart of Applebutter Hill

A Novel on a Mission

Immature poet imitate...but the mature one steal from the depth of the heart

Thoughts about writing, tech, and life

All in a Day's Breath

"There is nothing to writing. All you have to do is sit down at a typewriter - and bleed." Ernest Hemingway

One Chance to See the World
Stevie Turner

A writer inspired by nature and human nature

a blind writer's path to happiness