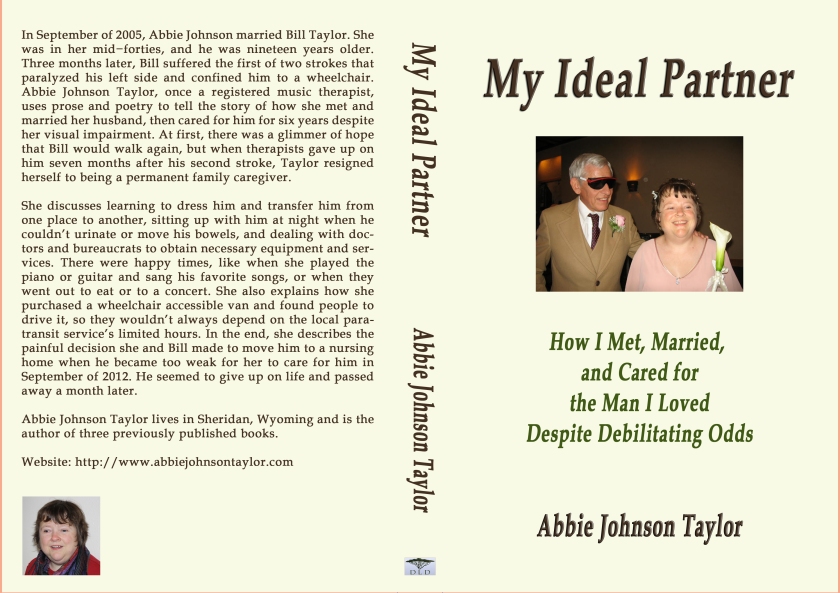 In September of 2005, Abbie Johnson married Bill Taylor. She was in her mid—forties, and he was nineteen years older. Three months later, Bill suffered the first of two strokes that paralyzed his left side and confined him to a wheelchair. Abbie Johnson Taylor, once a registered music therapist, uses prose and poetry to tell the story of how she met and married her husband, then cared for him for six years despite her visual impairment. At first, there was a glimmer of hope that Bill would walk again, but when therapists gave up on him seven months after his second stroke, Taylor resigned herself to being a permanent family caregiver.

She discusses learning to dress him and transfer him from one place to another, sitting up with him at night when he couldn’t urinate or move his bowels, and dealing with doctors and bureaucrats to obtain necessary equipment and services. There were happy times, like when she played the piano or guitar and sang his favorite songs, or when they went out to eat or to a concert. She also explains how she purchased a wheelchair accessible van and found people to drive it, so they wouldn’t always depend on the local para-transit service’s limited hours. In the end, she describes the painful decision she and Bill made to move him to a nursing home when he became too weak for her to care for him in September of 2012. He seemed to give up on life and passed away a month later.

This couldn’t be happening, I told myself, as, in my underwear, I paced the upstairs hall in Grandma’s house between my aunt’s old bedroom and the bathroom. It was the afternoon of September 10, 2005. In the yard, I heard strains of music from the string duo my father hired for the occasion and the chatter of arriving guests. Soon the ceremony would start. Would I have to walk down the aisle on my father’s arm in my underwear? Where was my sister–in–law, Kathleen, who agreed to be matron of honor?

She was probably still at the motel with my brother, Andy; their two sons, Dylan and Tristan, ages eight and six, who were to be ushers; and their two–year–old daughter, Isabella, who would serve as flower girl. Not only were we missing ushers and a flower girl, but my dress was with Kathleen at the motel, or so I thought. Why wasn’t she here?

Campbell’s World–Reading with the Authors

For Those Using Talking Books

Have We Had Help?

The blog of a published writer

Some coffee, a keyboard and my soul! My first true friends!

Thrills, Spills, and just a dash of Romance

One writer's experiences, and battles with words

Showcasing My Writing and Me

The Only Tech You Will Ever Need

spiritual enlightenment and self improvement

Fiction with a sprinkle of reality...

Words of a clarklike female